Ramping Up Our Stock Boiler Program

At Nationwide Boiler, we are known for our relationship with B&W as a partner and stocking distributor. The FM-120-124 B&W D-Type Package Watertube Boiler, also known as our “World Boiler”, is always in stock and has been sold to six of the seven continents in the world. In recent years, we have ramped up our stock boiler program to also include new Superior firetube boilers in a variety of configurations.

To start off, we added two specialized, factory integrated packages. These 47.5 hp and 119 hp skid-mounted package boilers are pre-piped and wired and include a duplex feedwater system and blowdown separator with after-cooler. The 47.5 hp boilers are pre-certified for use in the most stringent California air districts, while the 119 hp packages are PEER compatible for both the SCAQMD and SJVAPCD jurisdictions. Our 475 hp, 150 psi design Superior skid-mounted firetube boiler, equipped with a Webster 7ppm NOx burner, is also ideal for customers in the most stringent areas of California. All three of these systems are currently available from our shop in Fremont, CA.

To round out our stock inventory of pacakge firetube boilers, we now have the following brand new Superior boilers available for quick ship and immediate needs:

These stock boilers are pre-built with the burner left purposely un-mounted to allow for greater flexibility in matching the unique fuel, emissions, and combustion needs of each customer. The burner can be quickly mounted prior to delivery or installed at the site, based on customer preference. The boilers are designed for indoor and outdoor applications, with most currently being stored at the manufacturing facility in Hutchison, KS. All units are now available for immediate shipment upon customer request.

We also have our very first, zero emissions electric boiler now available for rent or for sale. This boiler, built to provide 50 hp steam at a design pressure of 150 psig, is another one of our factory integrated units, with feedwater system and blowdown separator pre-piped and wired as a skid-package.

In addition to the new boilers that we purchase specifically for our stocking program, our fleet of rental boilers and auxiliary equipment range in size and in age. We are always open to providing a solution from our rental fleet as well, if the opportunity arises. Be sure to check out or complete inventory of boilers available for sale to find a unit that fits your unique needs.

Please give us a call at 800-227-1966 if you have an immediate boiler need that can be fulfilled from our stock of brand new boilers, reconditioned boilers, or equipment from our rental fleet.

And check out our latest Steamlines newsletter, to find this article as well as other recent project highlights, equipment spotlights, and company updates.

In a time as challenging as what we are facing today, giving back is more important now than ever. Non-profits are being hit hard; annual fundraisers are being cancelled or postponed and donations are lacking due to the financial struggles of the economy. In fact, the team at Nationwide Boiler had to make the unfortunate decision to postpone the 40th Anniversary of our Charity Golf Tournament, an event that now raises an average of $50,000 each year. In 2019, the total raised was split between the ABMA Scholarship Fund and Make-A-Wish® Greater Bay Area.

Make-A-Wish® Greater Bay Area is one of the largest and most productive chapters nationwide. In 2019, they granted 347 wishes for local kids with critical illnesses and assisted with a record-breaking 110 wishes for kids from across the world. Since March, the organization has had the painful task of communicating to families that over 80 wishes are on hold until it is safe to commence.

As CEO Betsy Biern stated, “We’re far from alone in experiencing unprecedented challenges during this global pandemic. In a way, the entire world has become a wish family—we’ve received a terrible diagnosis and must put ordinary concerns aside as we face a new and sometimes terrifying reality. During a time like this, I take even more inspiration from our wish kids and their extraordinary resilience. Like them and for them, we will move forward with as much courage and grace as possible under the most difficult of circumstances. There simply is no other option.”

While the organization is currently postponing wishes, they are still taking and processing wish referrals and have definite plans to grant those waiting wishes. They are even looking into ways to grant children’s true wishes virtually.

With the tournament cancellation a reality, we at Nationwide Boiler were determined to find a way to continue our tradition of giving back. Two months after the original scheduled event and time spent analyzing the effects of the pandemic on our business, Nationwide Boiler is excited to be in the position and able to donate $10,000 to Make-A-Wish® Greater Bay Area. Furthermore, three companies who committed early on to sponsoring our tournament have also chosen to contribute their funds, bringing the final endowment to $12,000. A big thanks to Alzeta, DJ Conley, and Wilkinson Companies! If you are interested and able to help support the cause, too, visit www.sf.wish.org.

Nationwide Boiler’s 40th Annual Charity Golf Tournament is now scheduled for May 6 – 7, 2021 at the Pebble Beach Golf Links. We will resume with our “Back to the Eighties” theme as planned, and all funds raised will be in support of both the ABMA Scholarship Fund and Make-A-Wish® Greater Bay Area.

Routine maintenance on your boiler is a critical component for proper and efficient boiler operation. One of the main factors to improper maintenance that can also lead to boiler failure is not understanding the concept of blowdown. In this month’s Boiler Basics 101, we will be going over what blowdown is and how it will help improve your boiler’s health. 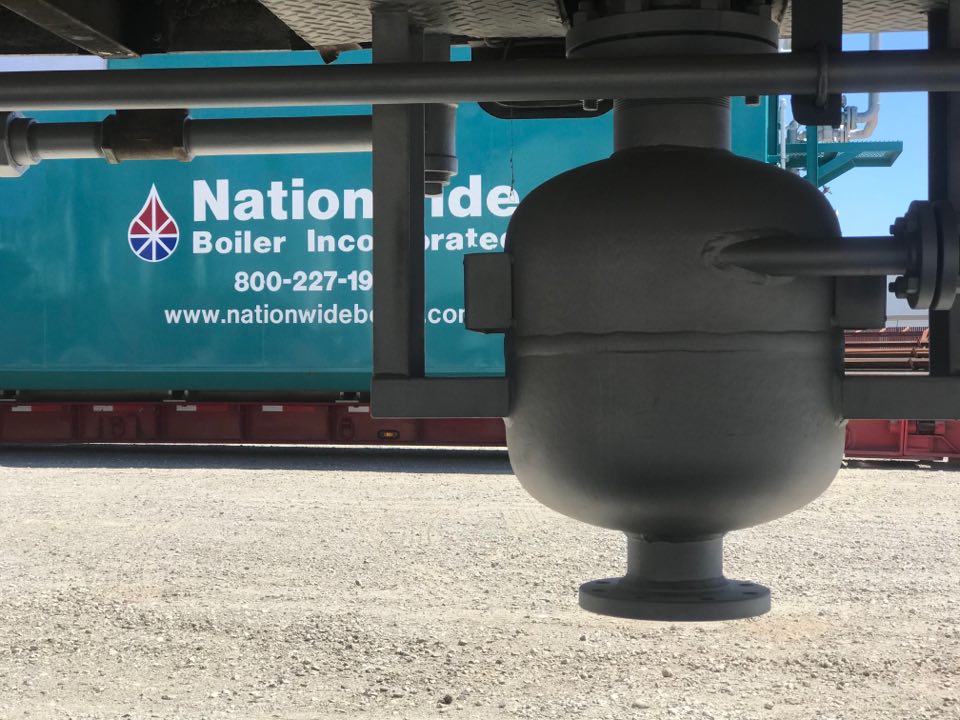 When boiler water turns to steam, solids from the water are left behind. The blowdown process involves partially draining the boiler to remove the sludge those solids create. If these are not removed, boiler performance will be reduced and ultimately, it can lead to boiler failure.

It is important to consider proper blowdown procedures to keep the water piping clean and the boiler in working condition. If you would like to learn more about the different blowdown procedures, check out ABMA’s article outlining the steps for each type.

Be sure to check out our previous Boiler Basics 101 blogs and stay tuned for the next edition!

Summer is officially here, typically a season jam-packed with tradeshows and conferences for Nationwide Boiler. With effects of the COVID-19 pandemic changing the way many businesses and organizations operate, event coordinators have had to make tough decisions to either cancel, postpone, or reorganize and host their events on a virtual platform. As they say in show business, “the show must go on!”, and we are happy to announce that Nationwide Boiler is participating in two virtual tradeshow events this summer.

This is the first year that Nationwide Boiler is participating in the Downstream Conference, originally scheduled to be in Houston this month. The show has gone virtual and we are excited to be participating in our first virtual event along with more than 50 other companies.

Downstream will be hosting new remote virtual access Q&As, breakout sessions, workshops, and audience polls, accessible right from your computer. The tracks being offered are focused on the latest services and technology solutions that will benefit across your entire plant lifecycle. Come and join us on June 9-11 for an opportunity to connect with fellow attendees and potential new partners. And the best news yet, registration is free! Sign up today and visit all of the virtual exhibitors to be a part of this exciting new virtual tradeshow experience.

Every year, IDEA hosts an industry-wide conference that deals with topics of relevance to its members which includes general sessions, seminars, workshops, user groups and event-specific breakout groups. Although originally planned to take place in Washington DC, IDEA2020 has moved to a virtual platform.

On June 24, join IDEA members and professionals in the district energy, CHP and microgrid industries as we all come together to share experiences, explore new solutions, and learn from each other. IDEA2020 Virtual Town Hall provides the ideal space for industry leaders, energy and environmental experts and business partners from around the globe to discuss the "New Vision for District Energy".