Nationwide Boiler recently wrapped up our 39th Annual Charity Golf Tournament and we are excited to announce that this year, we raised a record amount in support of Make-A-Wish® Greater Bay Area and the American Boiler Manufacturers Association Randy Rawson Scholarship Fund. With the generosity and support of 56 golfers, 106 banquet attendees, and over 50 corporate and individual sponsors, we raised a grand total of $64,000! A huge thank-you to everyone involved for the outpouring of support.

The tournament began on Wednesday, May 8th with a practice round of golf and scramble competition at the Poppy Hills Golf Course. Guests worked up an appetite for our traditional Clam Bake Buffet that evening, where we raffled off an ounce of gold to the lucky winners, Scott & Carol Sanders from HTS. We also announced the winning foursome from the scramble, which included Grant Carter & Jack Oliver from ADCO Companies, and Jon Craig & Nick Kammeyer from C&C Boiler, two of our long-time representative companies.

Tournament play began bright and early the next day at the renowned Pebble Beach Golf Links. Guests participated in several fundraising activities both during the round of golf and that evening at the awards ceremony & banquet. These activities included mulligan sales, best ball competitions, a unique card raffle game, and silent and open auction events. 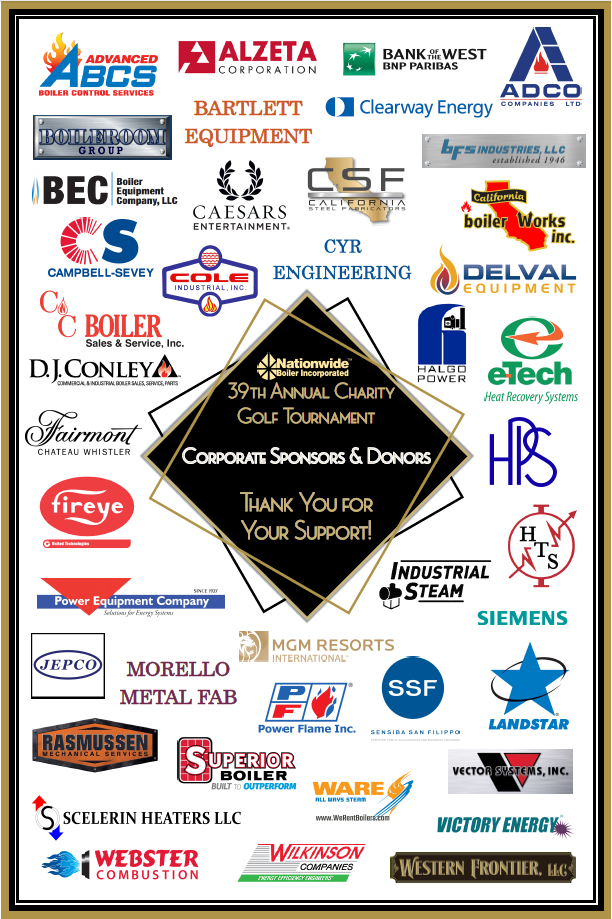 Upon conclusion of our Roaring Twenties theme banquet, the following tournament winners were announced:

Congratulations to the winners and thank you again to all of our tournament sponsors and donors. Be sure to save the date for the 40th Anniversary of Nationwide Boiler’s Annual Charity Golf Tournament, scheduled for May 6-7, 2020.

Remember, giving is not just about making a donation, it’s about making a difference. We intend on continuing our tradition of giving back to charitable causes like Make-A-Wish® and the Randy Rawson Scholarship Fund for many years to come.

The Cost of Renting a Boiler

Ramping Up Our Stock Boiler Program

Steam: The Most Effective Way to Transfer Heat or Energy

No comments made yet. Be the first to submit a comment